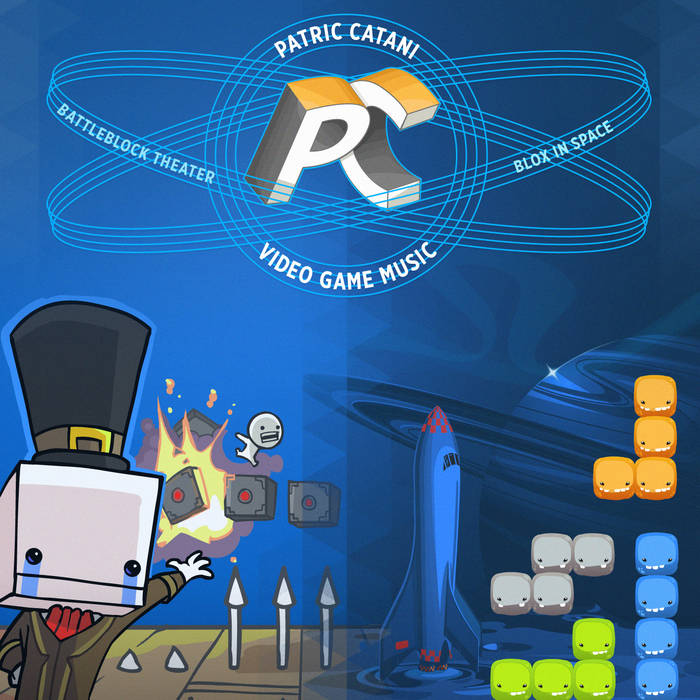 Welcome to the cheerful world of Patric Catani´s video game music.
This is an album including two different video game soundtracks, first of all the Catani contribution to the wonderful and astonishing XBox game “Battle Block Theater” by The Behemoth (Castle Crashers). The second soundtrack was written for the Tetris adoption "Blox in Space" by Ninzini Playground.

Both soundtracks focus on a cartoonish fairy tale space disco direction that supports the atmosphere of little comic creatures going through jump and run, platform and puzzle game adventures.

The Battle Block Theater music is a selection of spacey and thrilling uptempo tunes underlining the nostalgic but up to date / state of the art comic design of the game.

Obviously making music for a Tetris game was a super pleasant but more tricky task, since only mentioning the word Tetris recalls memories of the famous original Tetris Theme which probably is the most famous video game music of all times.

I was happy when I finally composed the main theme that adopts a sort of russian atmosphere but takes it to space and dramatic Morricone flavored cartoon worlds. The original concept was to get a new song with moving up in the levels. The main theme “Tetris Life” is the music it starts with. The second level is “Pina Colada on Venus”, which is a funny calypso style adoption and the last level “Tetris Pro Player” is more based on J-Pop and Happy Hardcore.
This release also includes the opening theme and the Game Over / Highscore music.

Both soundtracks show a big influence of one of my favorite game soundtracks “Parodius” by Konami, released on Gameboy, Super Nintendo and Playstation. Instead of covering original classic music, I focused on writing new melodies combining classical elements such as clarinets and choirs but also energizing beats and Acid Basslines.

If you need music for your game, film, documentary or another media production, don´t hesitate to get in touch. My partners from Freibank and Soundlagoon.com can give you access to a big sound archive to easily license music. Of course it´s also possible to write original music for that purpose as well. Please write to Fredrik[at]Freibank.com about licensing or write to order@soundlagoon if you want to have music written especially for your production.

Here´s where you can find The Battle Block Theater Game by The Behemoth:
www.battleblocktheater.com

These trailers show you how the music was used in the game:
www.battleblocktheater.com/media/#videos

Thanks to THE BEHEMOTH and NINZINI for letting me use parts of the artwork. The PC logo was originally created by Herr Mueller - www.ilikeyourbadbreathdaddy.de